Back to Dit is Dit's homepage' 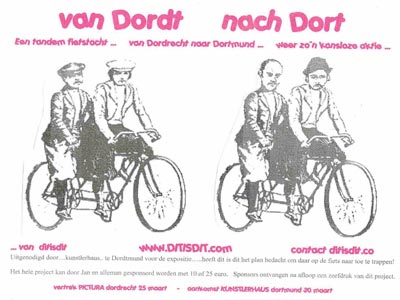 As a result of the invitation of ‘Künstlerhaus’ in Dortmund, Germany, for the exposition ‘Repeat When Necessary’, 4 of us with moustache went there on 2 pink tandem bikes.

(The journey was documented by means of photography, video, a ‘my little sony’ and drawings. This material was then exhibited at the Künstlerhaus Dortmund. Of course we had a lack of money to survive such an absurd trip and therefore we had nice people to sponsor us!

In change for their sponsorship, they received an unique, fantastic and exclusive ‘dit is dit – Dordt to Dort’ silkscreen print and as a bonus an exclusive DVD!

You however, have to do it with these pictures and a summary of this adventure, which you can read here:

Tag 1 : We left from gallery ‘Werkstatt’ in Dordrecht at 14:30 and cycled 110 km to the ‘great’ city of Eindhoven. When we arrived at 22:34 we were totally exhausted, especially one of us( we thought he would die). The friendly locals offered us a bubble bath and taco’s at midnight so we were alright the next day.

Tag 2: The friendly locals, mentioned before, (who by a strange coincedence happen to be the parents of one of us) had planned a more efficient route for us and they made us some maps. Then finally we were off and after about 60 km we passed this bungalow park called ‘Centerparcs’. So we walked in and asked the manager for a free stay in one of their cottages. They were alright with it, and so we could all take a bath once again. The security guard there is in to live action role playing (check out cauldron-nl.bene.ws/). He likes to dress up like an elf or some kind of ork and do this fantasy thing. It was this guy that finally made us realize what it is we do. We life action role play art.

Tag 3: After a relaxed breakfast and a quick tandem check we were off again. We first needed more maps, so we dropped by the local tourist office. The friendly ladies from the so called VVV gave us the map for free and 2 stickers!. Shortly after this we managed to manoevre one bike in such a way that it hit this sewerhole in the road, and it took out our backtire. Luckily we found this bikeshop in Straelen, Germany. They offered to repair the bike for free. We only had to pay the tire. We were back on the road 2 hours later. Not much later we asked the way to Duisburg. This german guy goes like “ja ja immer gerade aus und dies und das zen you passss zis van der Valk Hotel, und dan gehe Sie….etc” and we go “did you say Hotel?” and so that night we had another (almost) free stay incl. bath in this 7 room penthouse. Thanks to Hotel van der Valk in Moers, Germany.

Tag 4: The next morning we wake up in this penthouse thing , only to find that our fucking pink tandems were stolen! What to do? What to do? This is were the project changed. First we went to the Polizei, and on our way there we started interviewing all these people and a nun. Then we made posters which were sponsored by the ‘Zeeman’ and the photoshop. We hung up all these ‘Haben Sie mein Fahrrad gesehen’ posters through out the city of Moers. We also called the radiostation and took an interview and after that we walked into the editorial department of the local newspaper and gave an interview. After all this we were totally exhausted, so we returned to the hotel to collect our belongings, and we hoped for another night in this penthouse. And to our surprise, this was no problem for them. So after a long long day, we could all take a bath and relax in the penthouse once again.

Tag 5: We woke up, got out of bed, breakfast buffet and a newspaper with a colour picture of us and an artikel about our project. After a short visit of the KRIPO (Criminal Police) we were on our way to the train station. On the way there, people recognized us, and some even took pictures of us. This was our 15 minutes(?). So anyway, we managed to reach the train station and we took a train to Dortmund, we arrived there halfway the afternoon at the Künstlerhaus, right in time for some more beer. We started building the exposition that same night. No bath, but a great shower.

Tag 6: Well, we continued to build the exposition, and then in the beginning of the afternoon, one of us had to go back to Holland because he had to attend his brothers’ bachelor party. The expo opened that night and the curators were very pleased with our project. Everybody lived happily ever after.

(if you by any chance have seen our tandems, please notify us: contact@ditisdit.com)